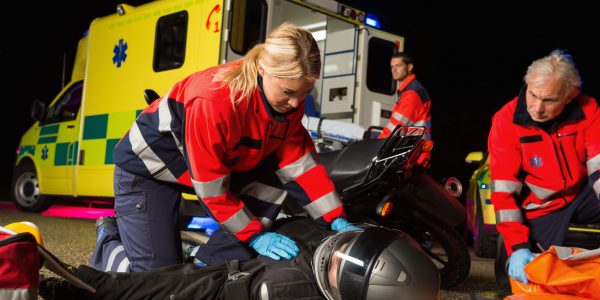 There are many dangers Las Vegas motorcyclists face every time they hit the road.v In this article we will discuss five of the dangers motorcycle drivers should be aware of when riding around the Valley.

Most drivers are looking for other vehicles, but often fail to see motorcycle drivers. It is all too often an occurrence that drivers fail to signal while changing lanes as well. To help avoid being hit by a car changing lanes you should avoid driving in blind spots and be mindful of cars that may be frequent lane changers.

When lane changing leads to an accident, it often includes an injured rider.  Side impact is likely to cause a motorcycle to lose control, which sends the rider and the bike to the ground.

Lane splitting is when a motorcyclist rides in between cars when they are moving slowly.  It is also called white lining.  This is not legal in Nevada, although side by side motorcycle riding is permitted.

Motorcycles are so maneuverable that they can dart in and out of lanes with ease.   To the non-motorcycle driver, this is often surprising and frustrating.  Lane splitting, especially in heavy traffic, can be a surprise to a motorist who is changing lanes.

While rain, snow, or hail aren’t common in Las Vegas, they do happen.  When roads are slick, motorcycle riders have a much greater chance of getting into an accident. This is especially true when taking a corner too quickly or following too close. Any scenario where traction comes into play imposes additional dangers to motorcycle drivers.  When severe weather in the Las Vegas Valley hits, we can often see over 100 accidents in a day!  Motorcycle riders should avoid the road when wet weather hits.

Drinking and driving is always dangerous, but while low alcohol levels may be safe to operate cars these levels may cause unnecessary dangers for motorcycle drivers. Even slight delays, impairment, or lack of focus can compromise a motorcyclist’s safety.

Similarly, drivers who are under the influence are a great danger to motorcyclists.  Their reflexes are impaired and they are not as likely to react to a motorcycle, especially one who is changing lanes or driving fast.  Impaired drivers pose a great threat to motorcyclists on the road.

Many motorcyclists enjoy the fast acceleration and maneuverability of their bikes.  The term crotch rocket is applied to many motorcycles for that very reason.  But speed reduces the amount of time both the rider and other drivers have to react.  Many people say it takes 1.5 seconds to recognize a situation and react.  Clearly, at high speeds, we don’t always have the time we need to avoid an accident.  Mitigating speed is the number one way to be safer on the road as a motorcyclist.

If An Accident Happens…

Regardless of how careful you are, motorcycle and automobile accidents happen. If you are the victim of an accident that resulted from another driver’s negligence, having the right kind of personal injury attorney to represent you can make all the difference in the outcome of your case.

If you find yourself in this position contact Hale Injury Law and find out why our clients often refer their family and friends to us.